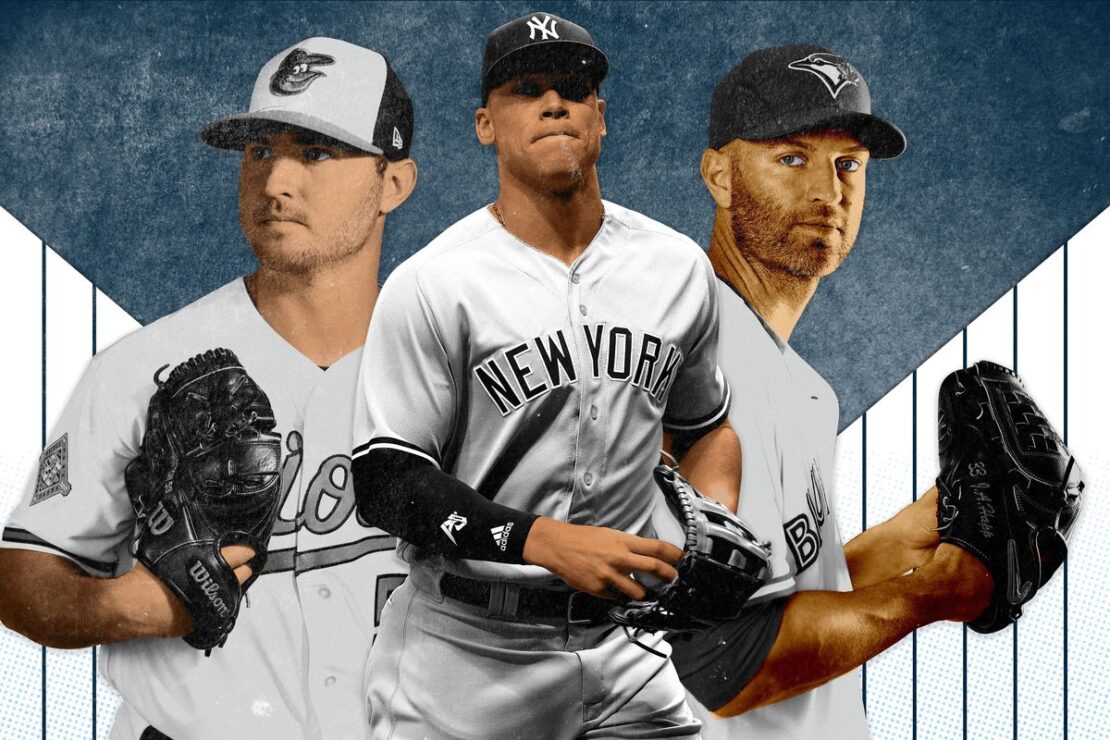 The New York Yankees did not grab a top-end free agent during the offseason and instead decided to make a few smaller moves on the offensive side of the game. With a full season of guys like Aaron Judge, Giancarlo Stanton, Joey Gallo, Gerrit Cole, and Aroldis Chapman, this could be a fun year for the pinstripes. However, let’s dive into the team and determine what their ceiling really is.

The Yankees offense was brutal at times as it seemed like they were unable to take off and put up some crooked numbers on the scoreboard. The Yankees made some changes as they traded away Gary Sanchez and Gio Urshela to the Minnesota Twins for shortstop Isiah Kiner-Falefa, third baseman Josh Donaldson, and catcher Ben Rortvedt late in the offseason. They also re-signed first baseman Anthony Rizzo for the full season.

They have a lot of pop in their lineup as they have Aaron Judge, Giancarlo Stanton, Josh Donaldson, Joey Gallo, Anthony Rizzo, and DJ LeMaheiu all able to dominate an at-bat and fail to miss many games throughout the season. This lineup can produce a lot of power in a very hitter-friendly Yankee Stadium. However, MLB is expected to be “deadening” the baseball so it will not travel as far. The offense should do well with those bats in the lineup routinely and the pitching doing pretty well.

The Yankees decided to not attempt to improve on the pitching staff during the offseason as another season with pitching coach Matt Blake should do the trick. I get it to a degree but the Yankees made waves in the rumor mill as they reportedly offered Justin Verlander $25 million per year but did not land another pitcher.

They do have a couple of losses on the pitching side of things heading into the 2022 season though as starting pitcher Corey Kluber signed with the Tampa Bay Rays after one season. Also, reliever Zack Britton is out for the season as he recovers from Tommy John Surgery. The bullpen will have guys like Chad Green, Jonathan Loáisiga, Wandy Peralta, Aroldis Chapman, and Lucas Luetge trying to do well.

The starting pitching is led by Gerrit Cole but they continue to have question marks behind him with Luis Severino trying to pitch for a decent amount of time, Jameson Taillon coming back off an ankle injury, Jordan Montgomery always being wishy-washy, and Nestor Cortes Jr trying to prove he isn’t a flash in the pan from 2021. The pitching staff needs to improve and that means having a starting pitcher go out there and eat innings throughout the season outside of Cole in order to help win some games.

What About the Rest of the AL East?

The AL East will be arguably the toughest division in MLB as four teams can realistically make the postseason with the new playoff format. The Blue Jays have an incredible core of position players and pitchers, trading for Matt Chapman while also having a permanent home for the first time in a few seasons. The Red Sox added Trevor Story as a huge free agent signing and are coming off an ALCS appearance. The Rays are the Rays and are going to win 95-100 games in their sleep with their formula to win games and dominate no matter who is actually on the field.

It is going to be a hassle to get into the postseason as they are dealing with a tough road to get there but the talent on this roster should be enough to at worst grab one of the Wild Card spots in the American League.