Ariana Grande became known in the series “Victorious” and “Sam and Cat”, soon after, she became famous thanks to her music and singles such as “7 Rings”, “Thank you, next” and many others.

Tekashi criticizes “Stuck With u”

Recently, she released “Stuck with U”, a collaboration with Justin Bieber to raise funds for a children’s association in the face of the health crisis, a song that has been very successful, but has caused criticism from Tekashi 6ix9ine’s.

Through his Instagram account, the rapper published a video where he assures that the count for the weekly Billboard chart was manipulated. His GOOBA video already has 180 million views in just one week.

However, billboard released its listing, and “Stuck With U” took first place, accusing it of Ariana and Justin’s team buying multiple copies to beat him in digital sales.

@billboard YOU’RE A LIE AND CORRUPT. YOU GOT CAUGHT CHEATING AND THE WORLD WILL KNOW.

The singer was not silent and decided to defend herself, she argued that she does not base her career on the charts, but that she is grateful for the support of her fans and happy that people listen to her music, but believes that people should understand that the single sold much more for totally different things than a race for first place.

In the letter that she published through her Twitter account, Ariana sent a hint towards the rapper, advising that it is best to be grateful that there are people who also support his music.

Scooter Braun also came out in defense of his artists and discredited any allegations, explaining that there are rules for sales that are posted on Billboard, but he also attacked the rapper arguing that his video had more publicity than it should in a normal video. 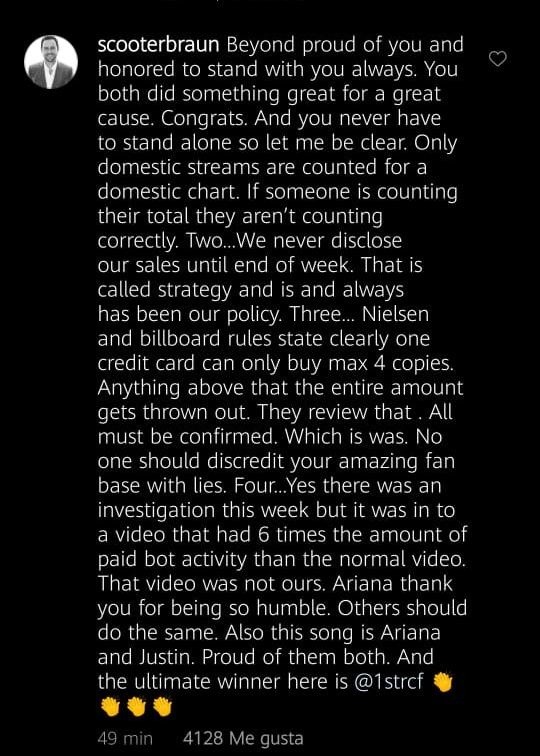 Since his release, the rapper has set out to return to the music industry, his single GOOBA has been highly successful; However, it seems that the problems have not left him behind, as his first controversy for making fun of Drake and Bad Bunny.