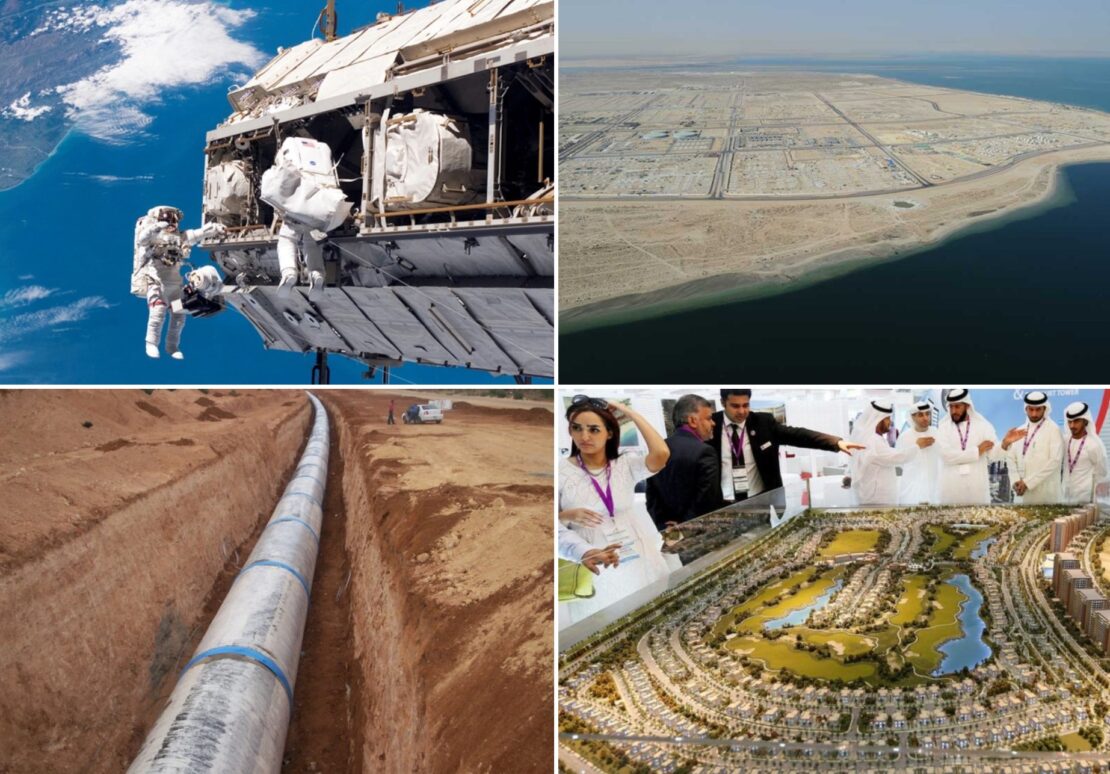 The impressive world of huge construction projects grows larger every year. However, most people’s association is huge skyscrapers or elaborate highways. Although these are impressive in their own right, there are much larger and incredible projects that have been in the works for a while now. Below, we will revise some of them and present you with some nice trivia on them.

The first project on our list is one of Saudi Arabia’s greatest projects ever. Jubail represents over 30 years of effort in creating a whole industrial city out of nothing. The creation of Jubail I was a huge success, allowing the Saudi Arabian government to reduce its reliance on oil revenue and expand its industrial capabilities. This success also gave way to the expansion of Jubail, titled Jubail II. The expansion started in 2014 and has the aim of utilizing the country’s hydrocarbon resources. This is supposed to further reduce reliance on oil and bolster Saudi Arabia’s economy. The construction includes desalination plants, railways, highways, and a lot more in this new industrial complex. The project has 2024 as the projected finish date.

The Dubailand project covers a huge area the size of three Walt Disney Worlds. On top of all the other impressive aspects of this project, there’s also the fact they managed to resolve any issues with access and keep the construction going. Large scale construction access can be a complicated matter, making it decently tough to get it right with even a single huge building, let alone such a wide-reaching project. The enormous area of this complex will be split into six parts. One belongs to theme parks, covering any entertainment rides that you may wish to embark on. The second part is full of sports venues, aiming to please all the sporty types and supply you with any needed equipment. Of course, if you are simply there for tourism, the eco-tourism section will provide you with visits to beautiful natural areas. Those who are more scientifically oriented won’t feel left behind either with a whole section dedicated to science attractions and buildings. The Dubailand also provides a hotel area that will allow you to rest in between visits to the other segments, topped off with the biggest hotel in the world, and health facilities for treatment of any health issues that may occur. The project has been slated to be finished by 2025.

See also  How Can A Photo Stick Help for Your Convenience?

The next project is the biggest irrigation project in the world. This Libyan construction project titled “Great Man-Made River” has been worked on since 1985. The finished version will be able to irrigate over 350,000 acres of land as well as spread the availability of clean drinking water throughout the area. The whole project is using the system called the Nubian Sandstone Aquifer System. This underground system is impressive on its own as it is the largest known fossil water aquifer system. It is used to supply the entire irrigation system with water. The whole project will be finished by 2030, providing a huge increase in the quality of life to surrounding areas.

For our last huge construction project, let’s take a peek at the final frontier, space. In the vacuum of space, a huge construction known as the International Space Station circles the earth. This huge station was created by the united efforts of 15 nations. The construction itself cost more than 60 billion dollars. However, it is nowhere near finished. The station continues to expand and grow and is planned to become home for over a million inhabitants once it’s fully realized. The projected finish date of this construction is unknown as the end goal is extraordinarily huge, while constant advances in scientific fields provide powerful alternatives to technologies currently applied, making it hard to estimate the finish date.